The natural home of the chinchillas is found in the Andean Mountains, also known as the Andes, in western South America.

With its 7,000 km (4,300 miles) the Andes is the world’s longest continental mountain range, running from Venezuela and Colombia in the north, through Ecuador, Peru, and Bolivia, and all the way down south through Chile and Argentina.

The Andes is the world’s highest mountain range outside Asia.

The highest point in the Andes is the peak of Mount Aconcagua, at 6,961 meters (22,838 ft) above sea level. This peak is located in Las Heras Department, Mendoza, Argentina.

The point on Earth that is the farthest away from the center of the planet is the peak of Mount Chimborazo in Ecuador. With an altitude of 6,263 meter, this is not the highest mountain in the world or even in the Andes, but its location along the equatorial bulge makes it the point on the Earth’s surface that is the farthest away from the Earth’s center.

The Andes is also home to the world’s tallest volcano: Nevado Ojos del Salado on the Chile-Argentina border. The peak of this stratovolcano is 6,893 meters (22,615 ft) above sea level. A small crater lake is found at 6,390 meters on the eastern side of the mountain, and this is believed to be the highest lake in the world. 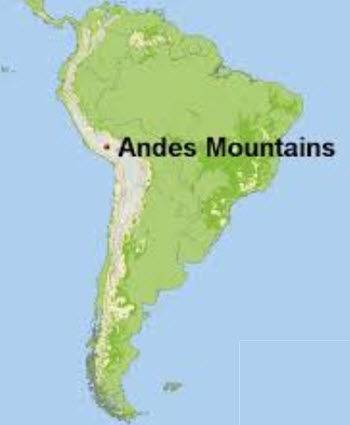 The Andes Mountains consist of several ranges separated by intermediate depressions. The ranges are grouped into three major divisions based on climate: the Dry Andes, the Wet Andes, and the Tropical Andes.

Several high plateaus are located within the Andes, and this is where many of the more prominent cities in the region are located, such as La Paz, Quito, Sucre, Mérida, Medellín, Arequipa, and Bogotá. The Altiplanto plateau is the second-highest plateau in the world; only the Tibetan plateau is higher.

The climate in the Andes vary greatly, depending on factors such as latitude, altitude and how exposed the area is to air drifting in from the Pacific Coast.

If we look at altitude, we can see that it gets colder and dryer the higher up we get.

These are just the general broad trends; in quite a few locations, the climate can be dramatically different in two spots located surprisingly near each other in the Andes.

Where is the snowline?

The location of the snowline will vary depending on location. In the northern part of the mountain range, including northern Peru, the snowline is found between 4,500 and 4,800 meters above sea level. In southern Peru is rises to 4,800 – 5,200 meters, and it stays there through the dry southern Peru and into northern Chile.

Around 30°S in Chile, the snowline descends again, down to 4,500 meters. From here, the climates gets colder and colder as we continue south, and the snowline gradually creeps down. By the 40th parallel south, the snowline is at approximately 2,000 meters above sea level. This parallel runs through Chile’s Los Ríos Region and Argentina’s Neuquén Province.

Fauna of the Andes 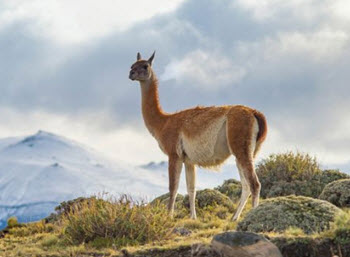 Thousands of animal species inhabit the Andes, from rainforest dwellers to creature capable of surviving in semi-deserts or enduring the coldness and windiness of the higher elevations. Many species are endemic to the Andes and found nowhere else in the world, such as the chinchillas. Of the roughly 600 mammal species that live here, approximately 13% are endemic.

Over 1,700 species of bird has been recorded in the Andes and roughly one third of the species are endemic to this mountain range. The degree of endemicism is even higher for reptiles; over 600 species have been recorded here and around 45% of them are endemic.

One of the most iconic of the Andean mammals is of course the Llama (Lama glama), a domesticated South American camelid widely used as a meat and pack animal by people living in the Andes. The llamas close relative the alpaca (Vicugna pacos) also lives here, at 3,500 meters (11,500 ft) above sea level. The alpacas are also domesticated camelids. They are significantly smaller than the llamas, and are kept for their fleece – a natural fiber similar to wool. Alpaca fleece is used to make a wide range of warm clothing.

Another well-known animal that inhabits the Andean Mountains is the Andean condor (Vultur gryphus), the largest flying bird in the world by combined measurement of weight and wingspan. Its maximum wingspan is 330 cm. Males weigh 11-15 kg, while females tend to stay around 8-11 kg. Andean condors nest at high elevations, up to 5,000 meters above sea level, and prefer to have their nests on rock ledges that are very difficult to access unless you can fly. They are long-lived birds with a lifespan of over 70 years.