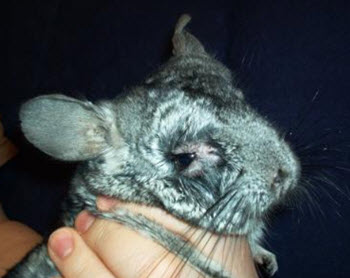 One of the most common bacterial infections in pet chinchillas is the one caused by the bacterium Pseudomonas aeruginosa.

This is a very common bacterium and many chinchillas (and other animals) can handle it as long as they are of good health otherwise. When a chinchilla develops symptoms of P. aeruginosa infection, it can be a sign that its immune system is somehow compromised or that it is living in an unclean environment.

The bacterium spreads in various ways, including direct contact, contaminated fecal droppings, and unclean drinking water. An infected female chinchilla is likely to spread it to her kits, and they may be too weak to fight the infection even though the mother appears to be okay.

A chinchilla ill with P. aeruginosa should immediately be quarantined from all other chinchillas (and other susceptible animals and humans) since this infection have been known to wipe out entire groups of chinchillas who are living together in captivity.

The presence of P. aeruginosa is usually confirmed through testing of the blood, but if there are ulcers the veterinarian can take swabs from them. 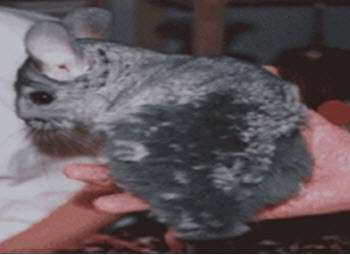 Pasteurella is a genus of Gram-negative bacteria. Cats and dogs are often carriers of Pasteurella in their nose and mouth without being sick themselves. In chinchillas, pasteurella infection can be lethal.

The bacterium Pasteurella multocida can be endemic in rabbit colonies and transmit through nasal secretions. The bacteria can survive for days outside the host as long as the environment is moist enough, and it can also survive well in water.

Gastrointestinal problems in chinchillas, such as constipation or diarrhea, is often the result of an improper diet. However, abruptly changing the diet when the animal is already sick is dangerous, since such a sudden change can be very stressful for the chinchilla and it might stop eating altogether. If possible, a gradual change toward a better diet is advisable.

In some cases, the gastrointestinal issues are a sign that the food stock has gone bad and the chinchilla can be kept on the same type of diet – the owner just need to replace the spoiled food with non-spoiled food of the same kind.

If the diet is already good, the next suspect is infectious disease.

If a chinchilla is badly constipated and need treatment right away, a veterinarian can prescribe paraffin and/or give the chinchilla a bowel-movement inducing massage, but finding the underlying reason for the constipation is of course important, otherwise these treatments will just be masking the symptoms.

Limb fractures are not only problematic in their own right, but they are also likely to interfere with the chinchilla’s food intake, as chinchillas like to eat sitting on their hind legs, holding their food in their front paws. Hand-feeding the chinchilla might be required until the cast comes off.

Chinchillas kept in groups in captivity can become so stressed by seeing other chinchillas getting food before them that they start convulsing. In the wild, chinchillas are grazing animals that feed continuously; they don’t have meal times when large amounts of food suddenly appear from the sky.