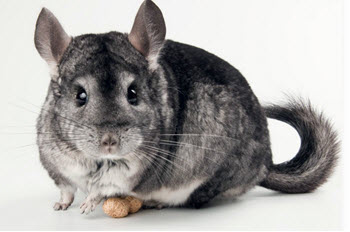 Chinchillidae is a family in the order Rodentia. It consists of the genus Chinchilla for which it is named, but also of two other extant genera and three extinct ones that we only know about from fossils. The two extant genera are Lagidium and Lagostomus, which both contains so called viscachas – close relatives of the chinchillas.

All members of the Chinchillae family are native to southern and western South America. Most of them live in the Andes Mountains, except for the Plains viscachas that inhabit flatlands in Argentina, Bolivia and Paraguay.

The members of this family are medium to large-sized rodents, weighing from 500 grams (18 ounces) to 8 kg (18 lb). Generally speaking, they tend to be gray or brownish-gray on the dorsal side, and pale on the ventral side.

They look a bit like rabbits or squirrels, with their strong hind legs, shorter forelegs, and fur-covered tail. All members of the family are covered in thick, soft fur, although exact thickness and overall fur quality vary between the species. The members of the genus Chinchilla are the ones that have been really heavily sought after in the fur trade and therefore killed in vast numbers.

The eyes are large, the ears medium-sized to big, and their incisor teeth continue to grow throughout their life.

All extant Chinchillidae species live in colonies. The size of a colony can vary from just a dozen individuals or so up to several hundred members. The are social animals and use vocalizations to communicate with each other.

Both species in the genus Chinchilla are listed in the IUCN category Endangered. They used to be listed as Critically Endangered, but has since made somewhat of a recovery in the wild and been re-classified to the Endangered category.

For Wolffsohn’s viscacha and Ahuacan viscacha, there isn’t enough data to place them into an IUCN category yet, although Critically Endangered has been suggested for the Ahuacan viscacha by the researchers that described it scientifically.