The Northern viscacha (Lagidium peruanum) lives in souhtern Peru and northern Chile, a might also be present in Bolivia (around Lake Titicaca) but this is still unconfirmed.

It lives in the mountains, from circa 300 meters above sea level and all the way up to an altitude of 5 000 meters. Most populations have been reported from the area between the tree line and the snow line.

The Northern viscacha seems to be fond of habitats where there are rocky outcrops and similar. They seek shelter in rock crevices, where they can hide from both land predators and predatory birds.

Larger, steep portions of cliffs seem to be especially popular among Northern viscachas, maybe because its easier to evade land-living predators there.

The Northern viscacha is hunted and eaten locally, but isn’t considered in danger of extinction.

The Northern viscacha can be up to 45 cm (18 in) long + a bushy tail that is almost as long as the body. The tail can be curled into a coil. 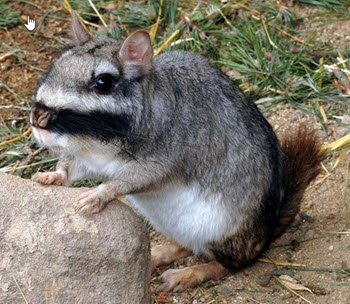 The body, including the ears, is covered in soft, dense fur, except for the tail which has coarser hairs. The dorsal surface ranges from dark gray to brown, largely depending on how far up the animal lives. High-altitude specimens tend to have brown fur, while those living further down are more gray. The ventral surface is creamy or pale gray. The tip of the tail is black or reddish-brown.

The Northern viscacha eats plant material, such as grasses, roots and seeds.

Breeding typically takes place in October-November, which is spring time in the southern hemisphere.

The pregnancy lasts for roughly 140 days.

The normal litter size is just one kit.

The mother nurses the kit for approximately eight weeks.

Examples of animals that hunt and eat the Northern viscacha:

The southern viscacha (Lagidium viscacia) lives in rocky mountain areas in central and northern Chile, western Argentina, southern Peru, and western and central Bolivia. It likes habitats where there are penty of rocks and crags, and it is capable of survining in habitats whit only sparse vegetation. Compared to the Northern viscacha, it is more of a strictly high-altitude animal, and it is generally not found below 2,500 meters. The highest altitude populations live 5,100 meters above sea level.

Adverse weather conditions can have a huge impact on the size of the colonies, with many viscachas dying from bad weather. It is hunted as food and for its fur, but not extensively so, and it is not considered endangered by the IUCN.

The average and maximum lifespan for wild specimens is not known, but one individual kept in captivity reached an age of 19 years.

The adult Southern viscacha grow to weigh around 3 kg (6.6 lb). It has long ears and the hind legs are much bigger than its front legs, making it look a bit like a rabbit or squirrel. The tail is long and bushy, with coarse fur, and ends in a black tip. The rest of the body, including the ears, is covered in long, soft fur. The dorsal part of the body is yellowish-gray while the ventral side is pale. The ears have a white fringe.

On the soles of its feet, the Southern viscacha have a type of fleshy pads called pallipes. These make the viscacha very good at moving over rocky surfaces.

The Southern viscacha tend to stay hidden underground or hidden among rocks a lot. Soon after dawn it comes out to feed, before heading underground again and staying there until dusk when it feeds again. If the weather is nice, it will spend part of the day sunbathing on a rock.

The Southern viscachas are social animals that live in small herds and use vocalizations to communicate.

The Southern viscacha tend to live where plant life is scarce. It will feed on the plant material that it can find; typically grasses, moss and lichens.

Mating occur during the last few months of the year.

The pregnancy lasts for approximately 130 days.

The typical litter size is just one kit, although two kits also occur.

The mother will nurse the kit for roughly eight weeks, but the kit can start supplementing its diet with plant food just a few hours after being born.

There aren’t many predators around where the Southern viscachas live, with one notable exception: the Andean mountain cat (Leopardus jacobitus). For this cat, viscachas are an important part of the diet, especially now when there are so few chinchillas left in the wild because of the fur trade.