Knowing which sex your chinchilla has is important to provide it with the right care and avoid problems.

If you want to keep more than one chinchilla, it is even more important to know the sex, to avoid unwanted pregnancies and fights over dominance. 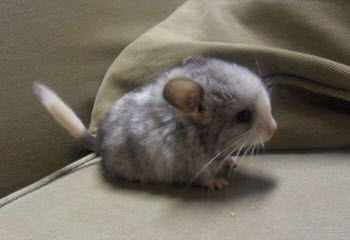 The average length of a chinchilla pregnancy is 111 days, but up to 120 days is considered normal.

Among breeders, it is common to house the pregnant female in a special cage without any other chinchillas. This cage can be rather small, e.g. 60 cm x 60 x 60 cm (24 in x 24 in x 24 in) since it is only for a limited period of time. Make sure the bars are spaced together close enough to prevent kits from escaping.

It is common among breeders to feed pregnant and lactating chinchillas alfa-alfa in addition to their normal pellet and hay rations.

A normal litter consists of one or two kits, but up to four kits do occur.

The kits are born covered in fur. Unlike puppies and kittens, their eyes are open right from birth.

Why shouldn’t I keep a non-neutered male with the pregnant female?

The female chinchilla has two uterus horns. It is possible for a female to go into heat while pregnant. If a male is around, she will mate with him, and a new litter will form in the available uterus horn. Although it is natural, many breeders want to avoid this from happening, since having to pregnancies going at once might put more stress on the female. Also, the second litter will be born as she goes into labor with the first litter, which means that you will get premature kits that are unlikely to survive.

Also, female chinchillas can mate and get pregnant again right after giving birth, and males are known to trample new born kits just to get close enough to mate with the female.

How long do the kits stays with their mother?

It is recommended to remove male kits from their mother when they are eight weeks old, because when they become sexually mature they will want to breed with their mother and sisters, and this can happen as early as eight weeks after being born.

Female kits can stay with their mother longer.